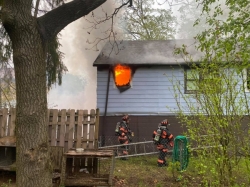 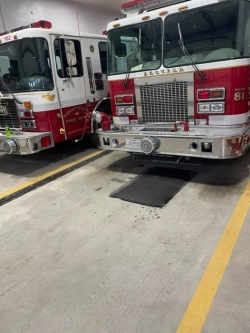 The beginning of the company was initiated in the fall of 1966, when several members of the Finzel area met to discuss the establishment of a fire company to serve the citizens of the Finzel, Avilton, Longstretch, and Pocahontas communities. Primarily the Frostburg and Grantsville fire companies were serving these areas at the time.
Several organizational meetings were held at various locations throughout the community. The Old Finzel Schoolhouse, Route 40 School, WFRB Radio Station, and Marsh Burdock’s store housed some of the gatherings. The Burdock Store became the location for the first firefighting training class.

The first official meeting of the department took place on March 13, 1967 at the Route 40 School. Fifty-seven residents were present for the meeting, along with Fire Marshall Jesse Jacobs, who attended to assist with the formation of the organization. The official signing of the charter occurred on March 30, 1967. The articles of incorporation were filed on April 17, 1967.

In October of 1967, a resolution was adopted to secure a loan for the construction of a building. At the time, the first piece of fire apparatus was being housed under a canopy at WFRB Radio Station. The building site was acquired from Ralph Race, a Frostburg banker and businessman. In late October, a two-story building was constructed. The structure consisted of a three bay garage, a kitchen, and a restroom area. The contractors were John Hershberger, Duckworth Brothers and George Eisentrout.

In June of 1970, the company recognized the need to expand the facility to create a social hall for use at fundraising events. The building, a 40’ by 50’, was constructed at a cost of $4,000 for the shell. The interior was gradually completed by the membership. An interesting fact unknown by many: “The building included a room that housed a branch of the Ruth Enlow Library until the late 1980’s” (Jim Raley interview).

In the spring of 1982, another expansion of the facility became necessary due to the increase of participation at fund raising events. The firemen prepared the architectural design and drawing. The expansion doubled the social hall in size and two bays were also added to house brush apparatus. Additionally, a lounge for the members was constructed. The kitchen facilities were expanded in the renovation as well. Paul Wiland and Sons Construction completed the shell of the building at a cost of $27,000. The interior was completed by the membership at an additional cost of $25,000. The new addition was dedicated in September of 1982 and was paid for in April of 1986. The mortgage burning took place during the department’s 19th anniversary banquet.

In 1990, the department recognized the need for additional space in both the social hall and the engine room. Plans were drafted to take the two bay spaces behind the social hall and renovate the area into social hall space. The old lounge area is the present location of the trophy case. And additional 20’ by 40’ area was gained in the expansion. Several minor renovations to the kitchen area and restrooms areas have taken place during the mid-1990s.

In the spring of 1991, the department membership developed specifications for an additional 50’ by 70’ addition to the engine room. The project involved the removal of the north wall of the old engine room and relocating all the electrical service housed on the exterior of the building. The new addition was completed in 1992, with the setting of the cornerstone during the 25th year anniversary banquet. The project interior was finished in 1993 mostly by the membership. New to the facility were a lounge area, two offices, a communications room and three truck bays.

Following the completion of these additions, the department moved forward with a total refacing of the exterior with brick in 1994 and a paving of the parking lot in the summer of 1996. Numerous projects have been completed to existing facilities over the past 30 years. The most recent updates to the building include a new walk-in cooler and walk-in freezer that was constructed in 2002. Prior to the new walk-ins, the department was storing food products and ice in about seven different refrigerators and freezers. Also a new metal roof was put on the building last year.

In the area of apparatus, the first piece of fire apparatus was a 1947 Mack Pumper, which was purchased from a fire department in Delaware. The Mack is housed at Eastern Garrett today and celebrates 50 years of age. While the unit has not been refurbished, it has been readied for parade participation. Another antique fire apparatus owned by the department is a 1953 Chevrolet pickup. Both units have been retired.

The company has also purchased several new pieces of fire apparatus over the years. The first new piece of equipment was a 1973 Chevy Pumper purchased from Maxim Fire Apparatus. It was sold by Charlie Black and Hugh Spier. The truck without equipment was purchased for $26,161.50. It was sold in May of 1997 for $7,000 to a station in Alabama. The decision to sell the pumper was one of practicality in that the engine was no longer being utilized to its potential as a fire apparatus.

During the 19th anniversary year, the membership began specifications for two new pieces of fire apparatus. The 1986 Ford Pumper was built by W.S. Darley of Chicago and sold by Ron Dugan at a cost of $53,200.00 without equipment. The unit was delivered and placed in service on June 6, 1987 at the 75th convention of the Allegany-Garrett Fireman’s Association. This truck was kept in operation until 2001. The other unit was a 1987 GMC Tanker, which was built by Four Guys at a cost of $68,000. The unit was delivered and placed in service at the department’s twenty-year anniversary banquet on April 24, 1987.

In 1994, the department purchased a 1995 Freightliner Rescue Truck, which was placed in service and ran its first call on the evening before Thanksgiving, November 23rd. The unit was purchased jointly thought a loan and grant from the Emergency Trust Fund at a cost of $142,000 fully equipped. Much of the equipment had been housed on a 1984 Ford Type III ambulance, a previous rescue unit.

Engine 81 is a 2002 Spartan Pumper, which was built and purchased from 4-Guys in Meyersdale, PA. The cost of the engine was $245,000 with an additional $1,000 expense in equipment for on the truck (Jesse Opel interview). This piece of apparatus was delivered and placed in service in February of 2002. Also, the ’87 Tanker was refurbished in 2001. A new paint job and additional lights are just a couple of things that the refurbishment included.

Over the years our members have become trained and equipped to respond to various special rescue calls. Currently we have members trained in Rehab, Swiftwater, Vehicle and Machinery Extrication, Confined Space, Collapse, Trench, and Hazardous Materials.

The first call of the company was recorded at the Garlitz residence on Beall School Road. The temperature was –28 degrees. The number of calls has grown over the years to a high in 2018 of 279 emergency calls. The least number of calls occurred in 1985 with only 35 rescue calls.

Are you interested in helping your community? There are many ways to help! Aside from Fire/Rescue/EMS you can help with social events like our Spaghetti Dinner, Turkey Dinner, Gun Bashes, Trunk or Treat, and so much more. If you or someone you know is interested in volunteering then fill out an application or send us an email for more information! 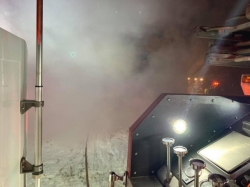 This site has been viewed 19,270 times.
Calls
News
Events
Pictures
Apparatus
Maintained by the members and staff of Eastern Garrett Volunteer Fire and Rescue Department. Designated trademarks and brands are the property of their respective owners. Copyright © 2006-2021. YourFirstDue Inc. All Rights Reserved. Content on this web site is supplied by Eastern Garrett Volunteer Fire and Rescue Department. YourFirstDue Inc. cannot be held responsible or liable for any content, text, pictures, or any other media found on this web site.
Management login
Powered by